How to Download and Convert Spotify to WAV Losslessly

WAV format is a lossless audio format widely used in Windows system. It's also popularly supported by most CD burners due to its uncompressed audio quality. Therefore, many Spotify users are trying to convert Spotify music to WAV for CD burning. To make it easier for you, here we'll introduce the most powerful Spotify WAV downloader, as well as, the step-by-step guide to download and convert Spotify to WAV without losing any quality.

Part 1. What Is WAV Format
Part 2. Best Spotify WAV Downloader
Part 3. How to Download Spotify to WAV
Part 4. Alternative Ways to Save Spotify to WAV

Part 1. What Is WAV Format

Before downloading and converting Spotify music to WAV, we'll make a brief introduction to WAV, which help you have a better understanding of this format.

Waveform Audio File Format, referred to as WAV or WAVE, is an audio file format standard, developed by Microsoft and IBM, for storing an audio bitstream on PCs. It is the main format used on Windows systems for raw and typically uncompressed audio. WAV is widely used by computer that cannot be understood by most CD players directly.

To burn WAV files to an Audio CD, it should be saved at 44,100 Hz with 16 bits per sample. Because if the uncompressed audio, WAV files are always in a large size, making it bot a good option to sharing online or playing in portable MP3 players. In spite of that, WAV format is often used by some radio broadcasters like BBC Radio, Global Radio, and more.

2. Which device is compatible with WAV?

If you're preparing to save your audio files to WAV format, you should figure out which device or player is compatible with WAV files. In fact, most portable devices on the market can play those audios in the format of WAV, including Apple Watch, iPod, Sony Walkman, and more. To play WAV files on the player, you could use VLC Media Player, Windows Media Player, QuickTime Player, iTunes, and more.

In order to burn Spotify music to CD, converting Spotify to WAV file format is badly needed. However, as Spotify music is protected by Digital Rights Management, only Premium users can download Spotify songs for offline listening. Even so, they are not allowed to convert Spotify songs to WAV or other formats.

Thankfully, there come some third-party tools that can solve the problem for good. ViWizard Spotify Music Converter is such a professional tool that can download Spotify music as WAV losslessly on Windows and Mac. With only a few clicks, you'll get WAV from Spotify with ID3 tags such as artist, album, covert, track number, title, and more retained.

Here are the main features of ViWizard Spotify Music Converter:

3 ways to archive output tracks: by artists, by artists/album, by none

Part 3. How to Convert Spotify to WAV via ViWizard

3.1 How to Download Spotify to WAV Free via ViWizard

Launch ViWizard Spotify Converter and wait till it completely loaded the Spotify app. Then log into your Spotify account and browse the songs or playlists in Spotify store. Drag any track or the whole playlist/album from Spotify to ViWizard conversion window. Or you can copy and paste the links of the Spotify streams into ViWizard.

The default output format of ViWizard Spotify Converter is set as MP3. Anyway, you can simply click the top menu bar and choose Preferences to select the output format as WAV. Here you can also adjust other audio settings manually, such as bit rate, audio channel, sample rate, etc.

Click Convert button of ViWizard and the program will start downloading the selected Spotify tracks to WAV file format at up to 5X faster speed. After the conversion, you can find the DRM-free WAVs in history folder. Now you can freely burn the WAV files to CDs or play the songs on any media player without limit.

3.2 Video Demo: How to Download Spotify Music as WAV

Other than using a Spotify WAV downloader, you could also record songs from Spotify and save them as WAV files. Here we'd like to recommend other two tools to help you extract WAV from Spotify.

TunesKit Audio Capture is a professional audio recording tool that can capture any output audio from the computer. It supports saving the recordings to WAV, AAC, MP3, and other popular audio formats. With it, you can record WAV from Spotify with high quality. 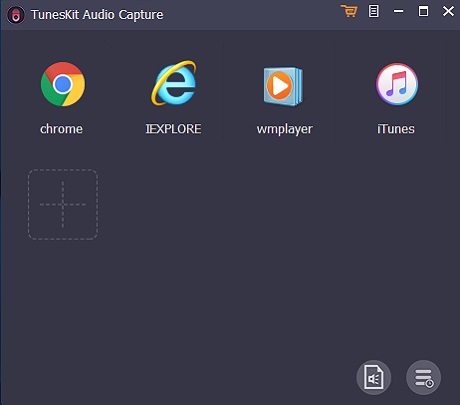 Step 1. Open TunesKit Audio Capture and then click the + button to add Spotify.

Step 2. Go to set the output format as WAV and adjust the bit rate, sample rate, and channel by clicking the Format button at the bottom right corner.

Step 3. Go back to the interface of ViWizard to launch Spotify and select a playlist to play.

TunesKit Screen Recorder is a multitask recording tool that can capture any audio and video from any resource on your computer with a single click. You could choose to save your recorded audios to WAV, MP3, and more and your recorded videos to MP4 and more.

Step 2. Click the Options icon at the bottom right and then adjust the basic recording options.

Step 3. Choose WAV as the output format and click the red REC button to recording Spotify songs you're playing on the computer.

No matter whether you are a free or Premium user of Spotify, ViWizard Spotify Music Converter will be a great option for you to download Spotify songs to WAV with lossless quality. It's full compatible with Windows and Mac, as well as, Spotify. In addition, you can also use TunesKit Audio Capture or TunesKit Screen Recorder to record WAV from Spotify.

Home > Spotify > How to Download and Convert Spotify to WAV Losslessly
Viwizard uses cookies to ensure you get the best experience on our website. Learn moreGot It!